The Isle of Sheppey can claim to be the birthplace of British aviation. Beginning in 1909 at Shellbeach (Muswell Manor) with the first aircraft factory, moving to Eastchurch in 1910 where it became the Flying Field of the Royal Aero Club with pioneers such as the Short Brothers, Charles Rolls (as in Rolls Royce), Cecil Grace, Frank McClean and visited by the famous Wright Brothers, Orville and Wilbur from the USA. 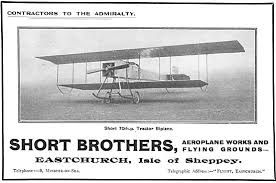