The Friends of Milton Regis Court Hall was formed in early 2011 by a group of people with a common appreciation of preserving our heritage, notably the Court Hall in Milton Regis, a building that still stands proudly as an icon of the streetscape after almost 560 years.

Built as Milton’s civic centre in c.1450 in the reign of Henry VI, its importance is that whilst at one time most towns would have had such a building, today there is only one other surviving example in Kent at Fordwich near Canterbury. This is why it is so important to preserve and maintain this historic building.

On the 11th March 2014 The Friends of Milton Regis Court Hall was registered with the Charity Commission as a Charitable Incorporated Organisation No 1156115, with the specific aims and objectives of:

The Friends Group is administered by a board of trustees and a managment committee.

Closed during the health crisis.

Normally open Saturdays only 10am to 4pm April to September (precise details on website). Other times for group visits by appointment. 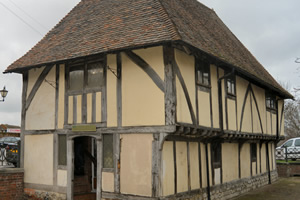